Does it make sense to spend $1 billion to build a basketball arena for a measly 41 homes games? Not likely. You’re not going to relocate the Golden State Warriors from Oakland to San Francisco and spend $1 billion, right?

The Warriors are not your daddy’s run-of-the-mill basketball team. In 2010 heavyweights Joe Lacob, a former VC honcho, and entertainment impresario Peter Guber led a buyout group to purchase the then Oakland-based Golden State Warriors. Two years later in 2012 they announced that they were going to build a new, privately financed facility in San Francisco, and in 2014 they said that the arena would be in Mission Bay. Oh BTW, the Warriors are pretty good; winning the league championship in 2015, 2017, and 2018!

A little history………. UCSF broke ground for a Mission Bay (medical) campus in 1999, the first building in Mission Bay (thanks to the efforts of then Mayor Willie Brown). It opened in 2003. After that, the area has evolved to include biotech research and development facilities, a hospital, residential rental and condominium buildings, the headquarters for Gap’s Old Navy, and the SFPD headquarters:  pretty much your standard downtown fare although not much in the way of entertainment and dining. 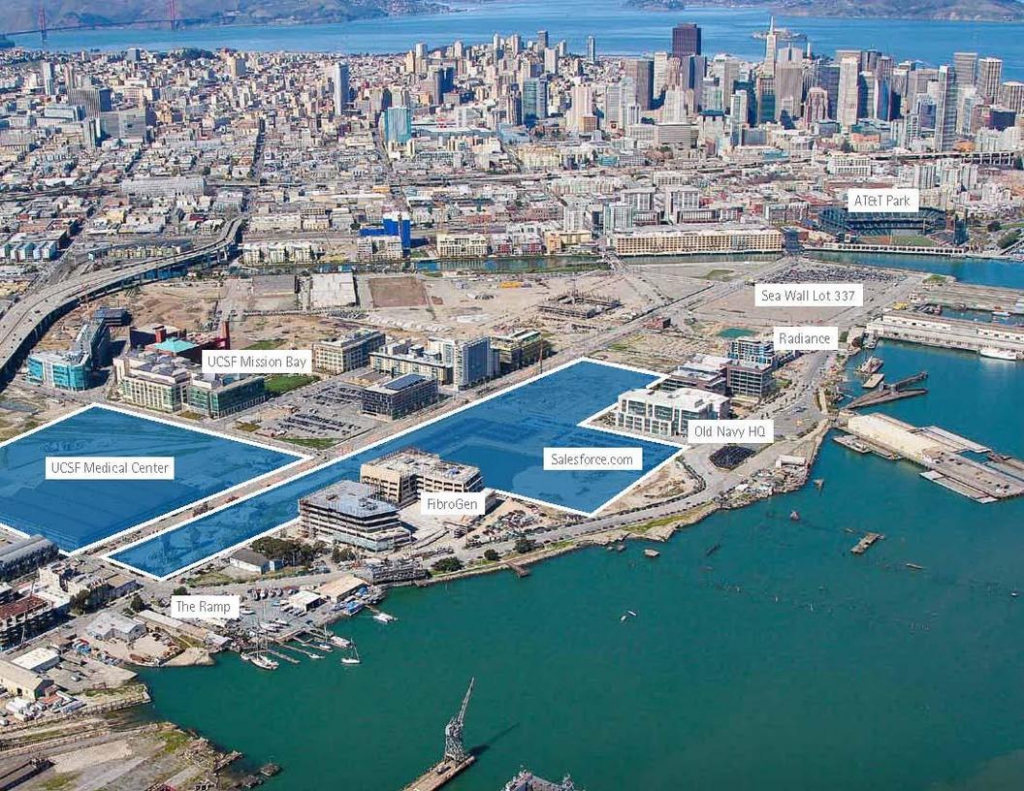 This is what Mission Bay looked like in 2011. Note that Salesforce had earlier bought a 14-acre site where it intended to build its San Francisco campus, subsequently opting to build the 60+ story Salesforce Tower on Mission at First.

Rendering of the finished Arena. Note the open space (the last big parcel) in the upper right corner in front of ATT Park, known as Mission Rock and currently under development by the Giants and Tishman Speyer.

About that $1 billion. A few months ago, I attended a get-together where the head of the Warriors construction team held forth. While acknowledging the existence of the Shoreline Amphitheatre (outdoor), SAP Center (way south of here), and Oracle Arena (somewhere east of here), there is no San Francisco venue where the likes of Taylor Swift or Adele can hold forth: they’re just not big enough. Ergo, the rationale for $1 billion and only 41 home game days/nights.