25 years ago, I was awakened by the Northridge earthquake at 4:30 AM. It sounded like a locomotive making its way through my condo in west LA. Although it was not my earthquake baptism, it stands out as being the loudest and the most “shaky,” probably because my son and I were only about 25 miles from the epicenter.

Which leads me to the topic at hand–new hospitals being built in the Bay Area. While new hospitals are being built to enhance health care and increase patient comfort, they are also being built to the highest earthquake standards. So, when you check in, rest assured you will be safe if the Big One arrives! 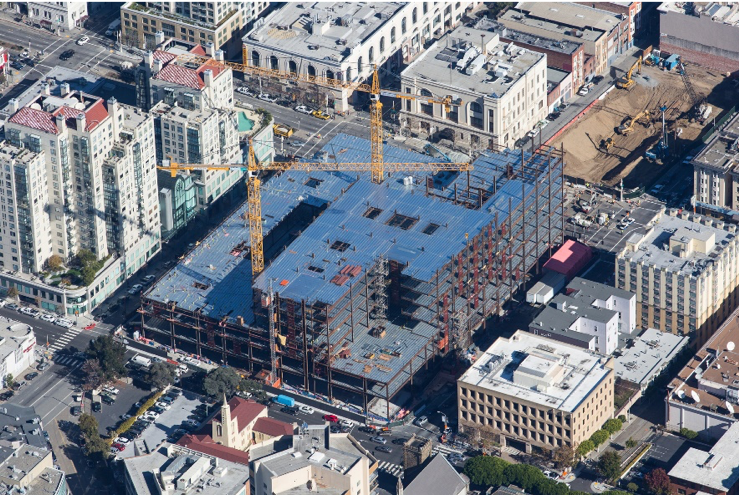 The accompanying image shows the California Pacific medical Center (CPMC) facility under construction between Van Ness/Franklin and Geary/Post. It was developed by Sutter Health and SmithGroup Architecture and constructed by HerreroBOLDT. It includes more than 100 viscous wall dampers that were placed around the building’s perimeter wall plates to absorb an earthquake’s vibrations. This is the first time this technology has been used for a U.S. hospital.

The new Stanford Medical Center (see picture on right) with 368 private patient rooms replaces the old Stanford hospital where I had a partial knee replacement and my suite mate fell out of bed at 2 AM–but that’s another story for another time. To better withstand earthquakes, the hospital was built on “base isolators,” which allow the building to shift three feet in any direction in the event of an earthquake. This technology is similar to the technology used for the new Apple complex.

The two hospitals cost about $2 billion apiece…and are most certainly where you want to be when your surgeon has scalpel in hand and is ready to cut.