I initially viewed the new Apple Campus from behind a chain link fence in early 2017 while it was under construction. Then two things happened.

First, I read an article in the New York Times about “base isolators” (more on that later). Then, I experienced the 7.1 earthquake on the evening of July 5th while visiting my son in Orange County–not my first and not fun!

My technological ability is below the poverty level: I am not a techie. But I am an inveterate New York Times reader, and have experienced my share of unsettling earthquakes. 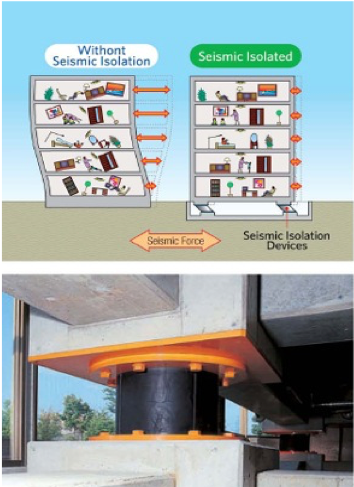 The Times article talked about 700 “huge stainless-steel saucers”–aka “base isolators” in tech terms–upon which the new Apple Campus building sits. Rather than being attached to the ground, like most buildings, they rest upon the saucer-shaped base isolators. When an earthquake hits, the saucers allow the building to slide back and forth (up to four feet) rather than shake and possibly collapse.

While such technology (theoretically) reduces the damage from an earthquake, as well as affords a faster re-use of the structure, it may cost more–up to 15% more than the most-used standard technologies in American buildings.

In Japan, another earthquake hotspot, construction has adopted the base isolator technology considerably more than in the United States. This might suggest that they have a longer-term perspective when it comes to their buildings. This great article will tell you more.

Base isolation technology is used in roughly 9,000 Japanese buildings. It is starting to take hold in the U.S. as well. In fact, Apple’s Silicon Valley headquarters is built upon these stainless steel saucers. Jony Ive, one of the building’s designers and the man responsible for the aesthetic of products like the iPhone and iPad, said that he and Steve Jobs never considered using a conventional foundation for the building. They saw base isolation technology as essential to the safety of their enterprise–“We would have seen it as utterly bizarre not to protect our investment,” said Ive.

If, like Ive and Jobs, business owners view their building as a long-term investment and seek to protect it from potential catastrophic earthquake damage, I think this is a definite possibility.